Taking advantage of the opportunities offered by the model change, our aim is to renew our university in line with economic challenges and market expectations. In the future, the academic community of the University will be able to develop its own long-term vision and participate directly in the process of its implementation. The institution, under the supervision and direct participation of the Board of Trustees, is given a strong guarantee to become a 21st century university.

Chairman of the Board of Trustees 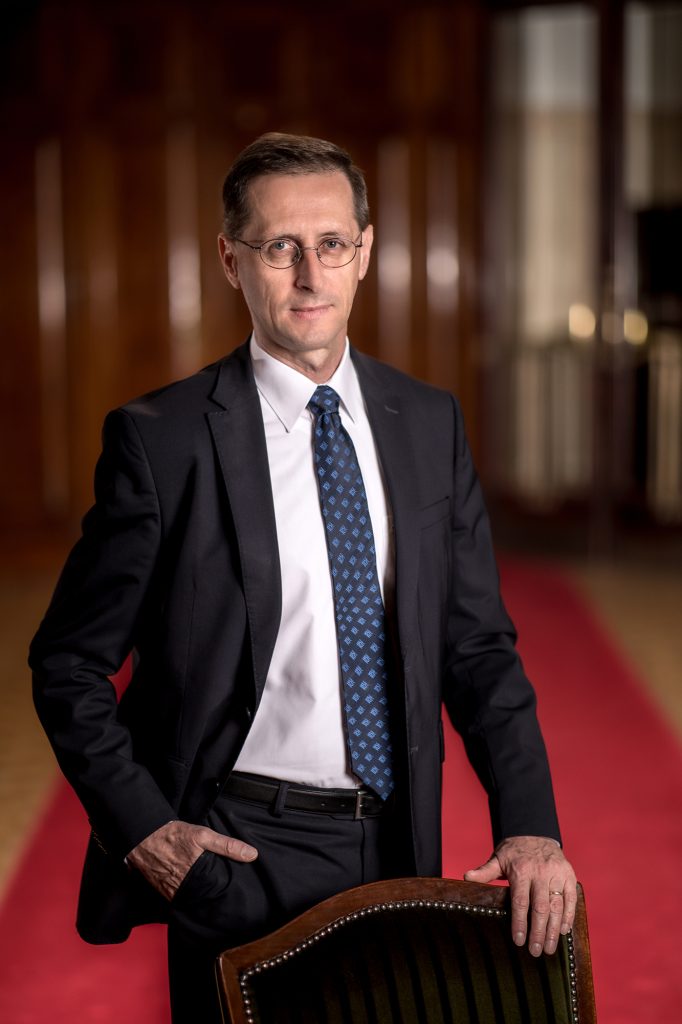 He graduated from the Budapest University of Economics in 1989. He started to work in Budapest for the State Construction Company No. 43 and then he worked for KEVITERV in Szolnok. Between 1995 and 1997 he was a lecturer at the College of Commerce and Economics in Szolnok.

As a Member of Parliament elected by Óbuda, Mihály Varga considers it important to support the development and operation of the university. With his support the Kandó Kálmán College building on Bécsi út could be renovated.

Since 1 August 2021, he has been the chairman of the Board of Trustees of the Rudolf Kalman Foundation for Óbuda University, which is responsible for the maintenance of the institution.

Dr. András Cser-Palkovics was born in 1974 in Székesfehérvár. He obtained his law degree at the University of Pécs and became a legal expert of European Law, after his studies he joined the Videoton Group as a legal adviser and councellor.

Since 2002, he has been a member of the Assembly of the City of Székesfehérvár, and between 2006 and 2014 he was a Member of Parliament.

Since 2010, he has been Mayor of Székesfehérvár. His mayoral programme has focused on the intensive development of higher education and adult education in Székesfehérvár, and on the expansion of the city’s heavy and manufacturing sectors with locally nurtured knowledge capital.

Under his leadership, the Municipality of Székesfehérvár entered into a partnership with Óbuda University, which resulted in the creation of the Alba Regia Faculty of Technology. Dr. András Cser-Palkovics has made it a priority to serve the expectations of young people, including both prospective and current students, as fully as possible, both in terms of higher education and local government opportunities, and has been a long-standing advocate of stronger symbiosis between the labour market and the university sector.

In 2018, he received the “Ambassador of Digital Education” award from the IVSZ for promoting digital and robotics education and adult learning, and for the creation of the Alba Innovar Digital Experience Centre.

Since 2021 he has been a member of the Board of Trustees of the Rudolf Kalman Foundation for Óbuda University. 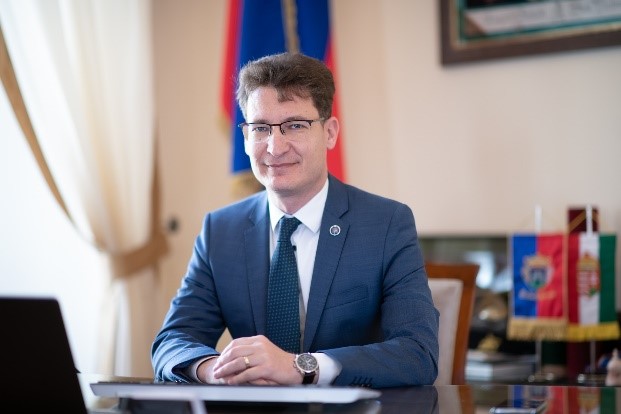 He received his PhD in 2008, also from BME. His research interests are mainly in the areas of modern control theory and physiological regulation, where he has published more than 450 international journal articles and refereed international conference papers. His cumulative impact factor is above 100, h-index 24.

Currently – since 2019 – he is the Rector of Óbuda University, formerly Deputy Rector for Education and Professor at the John von Neumann Faculty of Informatics.

He habilitated in 2013 with excellent results. He is a regular member of the Doctoral School of Applied Informatics and Applied Mathematics and of the University Doctoral and Habilitation Council, and head of the Knowledge Centre for Life Science Controls.

In 2012-2015 he was a Bolyai János Fellow of the Hungarian Academy of Sciences.

He is also a member of the Biomedical Panel (TC 8.2) and the Control Engineering Education Panel (TC 9.4) of the International Federation for Automation (IFAC) and the Hungarian Diabetes Society since 2010.

In 2015, he was awarded with the ERC StG, the most competitive research grant in the EU.

Born in 1958. He graduated as an electrical engineer from the Budapest University of Technology in 1982.

He holds an MBA in English from1994 and attended Harvard’s executive program in 1996.

Since December 1991, after privatization, he has been the owner-manager of VIDEOTON Holding Rt. and a member of the Board of Directors. Since 1996, he has shared the operational and strategic management of VIDEOTON as co-CEO with Péter Lakatos. His primary areas of responsibility include the financial management of the group, investment and treasury decisions, asset utilisation, investments, and control of the operational activities of the companies. Under their leadership, VIDEOTON has been the largest domestically owned manufacturing company in Hungary for two decades. The company’s growth has been outstanding since the 2008 crisis, its turnover has multiplied since then, and its added value has consistently ranked among the top three contract manufacturers in the EU.

He also takes on social responsibilities, including in higher education. He is active in sports, squash, and cycling. Besides reading, his hobby is the Hungarian painting. He is a local patriot from Székesfehérvár, his charitable activities are extensive, and he has been a supporter of the Csaba Böjte Monk Foundation for 10 years. Of his 3 sons, the two adults work for Videoton. 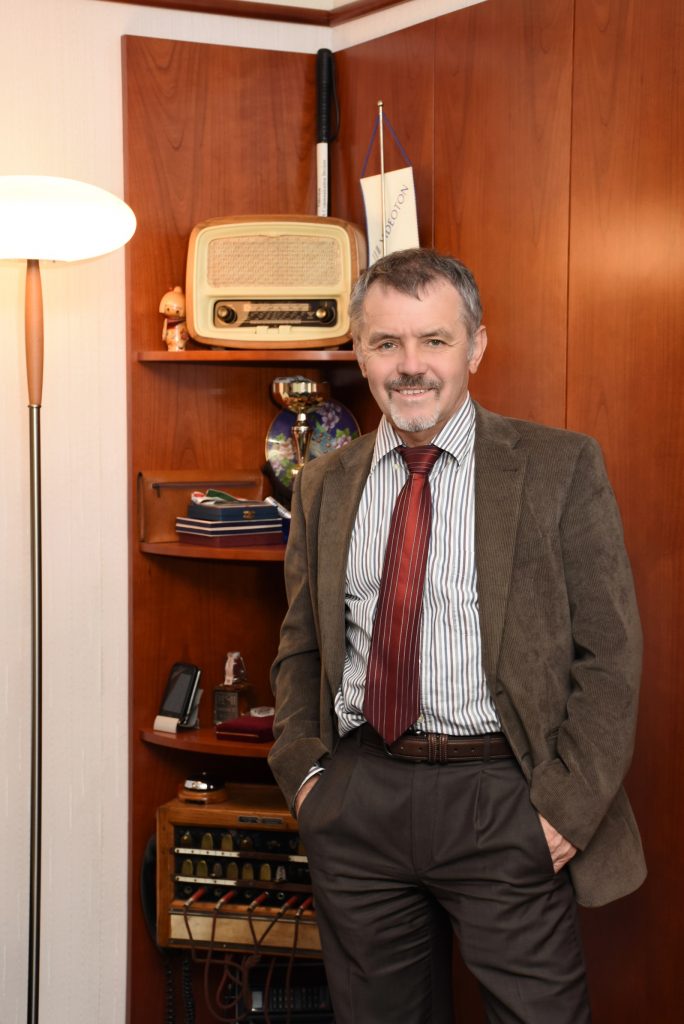 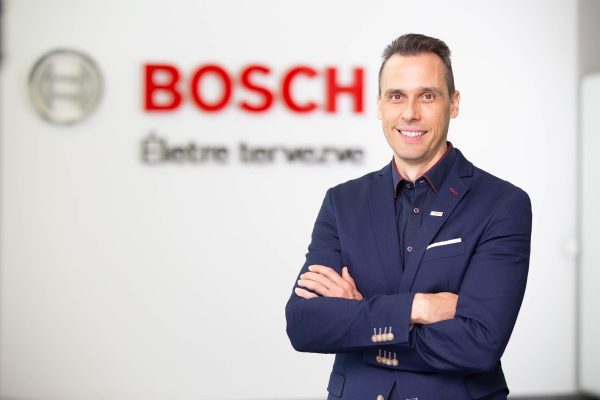 Dr. István Szászi was born in Mátészalka, Hungary, and graduated from the Budapest University of Technology and Economics in 1997 with a degree in automotive engineering, followed by a PhD in 2004 in the field of fault-tolerant vehicle dynamics systems control, and an MBA in 2005 in finance and economics, quality and production management. He continued his academic career as an assistant professor and then as an associate professor.

In 2004, he continued his career in the business sector as a project engineer for the Bosch Group in Hungary, before starting his management career in 2006 in Reutlingen, Germany. In 2009, he became Group Manager and then Head of the Vehicle Control Systems Development Department at the Budapest Development Center. After another assignment in Germany, he took over the management of the automotive electronics development division at the Budapest site in 2018.

He holds office as Head of the Bosch Group Hungary and Adriatic Region from 1 July 2021. He is responsible for more than 20,000 employees in the region, including thousands of development engineers in Hungary, Romania and Bulgaria.

He is involved in mentoring programmes for managers, is a member of the Hungarian Academy of Engineering and an honorary associate professor at BME.

Dr. István Szászi has been a member of the Board of Trustees of the Rudolf Kalman Foundation for Óbuda University since 25 March 2022.