Óbuda University (ÓU) is listed as the best Hungarian higher education institution in the Times Higher Education (THE) ranking of young universities. According to recently published data, among the first 350 young universities in our region, in addition to the ÓU, is a Czech, a Polish, a Croatian and a Serbian institution, commented Prof. Dr. Levente Kovács. The rector of Óbuda University believes this recent success indicates that ÓU has become one of the most significant technical higher education institutions not only in Hungary but also in regional competitions. Today, every third Hungarian engineer enters the labor market with a degree earned from ÓU. 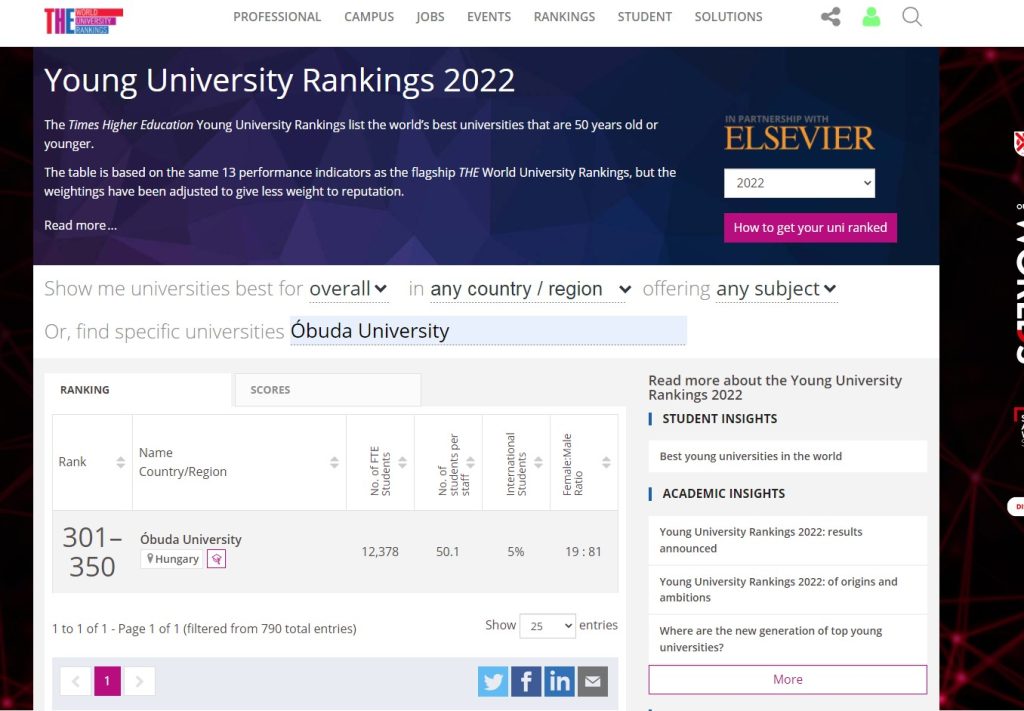 The table is based on the same 13 performance indicators as the global THE World University Rankings, but the weighting has been modified to give less weight to reputation given the young age of the universities. Universities are judged on all their core missions - education, research, knowledge transfer and international outlook - to provide the most comprehensive and balanced comparison possible. There are 539 universities in the 2022 ranking, compared to 475 in 2021, where Óbuda University was not listed at all.

This is not the first major achievement of the institution in rankings: in the global ranking of THE World University, published in early September 2021, Óbuda University first appeared making significant progress. The pace of development of the University is well illustrated by the fact that while earlier (2019) ÓU was ranked internationally (unofficially) in the range of 2000-2100. Whereas, based on 2019-2020 data, the university were simulated for the 1350th position. A year later, in the international rankings published on September 2, 2021, ÓU was officially positioned by Times Higher Education for the first time, immediately in the range of 1001-1200. Óbuda University has caught up directly with the Semmelweis University of Medicine and the major Hungarian universities as the highest ranked technical university in Hungary.

Óbuda University is the number one university in Hungary in the field of information technology in the THE subject ranking, published in October last year. Among the Hungarian institutions, Óbuda University (501-600), the Budapest University of Technology and Economics, the Eötvös Loránd University, the University of Debrecen (601-800), and the University of Szeged (801+) made it to this list. Every third engineer graduated in Hungary have earned their degree from Óbuda University. The students graduating here will be able to find a job in just a few weeks in their corresponding fields, added Prof. Dr. Levente Kovács, who said that in addition to advancing in international rankings, these indicators also reflect the strengthening and rising standards of the university.